If so, please call the experts at CMC Animal Control at (248) 904-5162. Our Harper Woods MI bat removal professionals will rid your home of pesky bats. 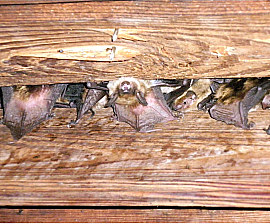 Are Bats Living In My House?

There are a few clues to look for in determining if bats are living in your house.

1. If you have had two or more encounters with bats flying around your house within one calendar year, then you probably have bats.

2. If you find piles of mouse like fecal material in your attic or on the ground outside your house, then you probably have bats. Bats defecate before they enter your home and below where they roost for the day. Make sure that the fecal material is  not old by laying down a piece of newspaper and see if any more droppings fall on the paper. If there is, you have bats. Just a word of caution about droppings. They can carry a fungus known to cause Histoplasmosis. Don’t breathe the feces and avoid contact with them. Ideally, you should wear a HEPA filter mask and spray the fecal material down with 10% bleach solution).

3. You can distinguish between bat droppings and mouse droppings in two ways. First, bat droppings tend to be clustered as they will pile up below where the bat is roosting. Second, bat droppings will have a shiny speckled appearance (from all the insect wings) and will crumble like dust when touched. Mouse droppings on the other hand, tend to be scattered about and become hard when dry.

You see bats flying around your dark house constantly and even see them disappear. Performing a bat watch at dusk is an ideal way of determining if you  have bats. While it is not one hundred percent accurate, it is still worth doing. Perform a bat watch by having people stand by your house at dusk till dark. They should be positioned to see as much of the house as possible. The first person to see a bat should shout out. If you have trouble identifying the specific hole, concentrate on the side of the house where the first person saw the bat. Only perform bat watches on non-rainy nights.

4. If you have a bat flying in your home during the winter time, then you can be certain bats are living in your home as they have decided to hibernate there. Warning: Be sure to follow the rabies protocols in your state.
source: icwdm.org

If you are in need of Harper Woods MI bat removal, please call the experts at CMC Animal Control at (248) 904-5162. Our bat removal team will get rid of your bats so you can go back to living your normal life. 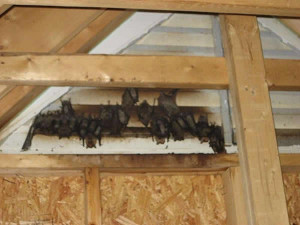 If you are serious about excluding bats from your home, please call the expert Grosse Pointe Bat Exclusion team at CMC Animal Control at (248) 904-5162 today.

Bats range in size across the different species, but tend to average about 5.5 to 19 cm in length (tip to tail) with a wingspread of approximately 15 to 38 cm. Most weigh between 3.5 and 60 grams (in the U.S.). Bats’ bodies are covered with hair varying in color from tan to black. Their wings stretch across elongated arm and finger bones.

Most bats have pointed ears and have the characteristic wings made of leathery skin; there is no fur on the wings. Bats also have teeth. When roosting, bats commonly hold on to their roost with their hind legs, hanging upside down. They cannot grasp with their front legs as the toes, known as fingers, are the support of the wing.

Most bats are insectivores, feeding on insects at night. Bats will also frequent outside lighting where insects will be flying in warmer weather. They may also be found near swimming pools, as insects might be attracted to these areas. There are some species that prefer other foods such as fruits, but most of these are not usually found in the United States.

Bats can be either colonial bats, living in colonies, or solitary bats, living alone or with just a few other bats. There is no queen bat in colonies; the bats just aggregate together.

Bats emerge in the early days of spring and leave their overwintering sites for summer homes. Typically, the first to establish nesting areas are the females ready to give birth. Because of their impending maternity, these new colonies are known as maternity or nursery colonies.

Baby bats are usually born during the summer months. The infant bats breastfeed until they’re ready to fly and hunt food on their own. The bats remain in this roost until the fall when it’s time to overwinter. Prior to leaving for winter residence, males begin arriving at these colonies in large numbers, ready to mate with the female inhabitants.

Winter hibernation is an instinct felt by all domestic bat species. Some travel less than 100 miles, while others travel thousands of miles from their summer roost. Equally fascinating is that some species winter in small groups, while others choose to gather in large numbers for their winter rest.

Many bats produce one litter of a few young per year, but number of offspring and mating habits vary depending on bats species.

Signs of a Bat Infestation

Homeowners may detect bats in several ways. As bats enter and leave an opening, the oils from their fur get deposited and can result in a brown to black stain. Bats can cause noises inside the home from their routine activities. Their droppings are another indicator of bat activity. The droppings are segmented and full of insect parts, which helps differentiate them from mouse droppings. The bats themselves are a sign and may be observed exiting from the home in the dusk to early evening hours.

Bats are a unique mammal that has a long and storied history full of misconceptions. Through time, they’ve become associated with evil of many forms, such as sorcery, witchcraft, haunted cemeteries and vampires. Bats also have long been feared due to a belief that rabies is rampant within their population. This is only partially true. Bats can carry rabies, but it is rare, and most bats prefer to avoid interaction with humans so the chances of transmittal are low except when performing bat control work.

What is true about bats is they’re nocturnal and the only mammal capable of true flight. Bats are beneficial to humans, since common species feed entirely on insects. Some people even choose to install bat houses on their property to encourage nesting.

Though bats are distinct as a family, individual species can be difficult to differentiate. There are over 900 species of bats worldwide with approximately 40 of these residing north of Mexico.

The three of the most common species encountered domestically are the big brown bat, the little brown bat and the Mexican free-tailed bat. These can be difficult to tell apart (even for a professional), so it’s recommended that an expert be consulted prior to attempting any control efforts. source: orkin.com